In general, there are four levels of testing: unit testing, integration testing, system testing and acceptance testing. The basic purpose of testing in different levels is to make software testing systematic and identify all possible test cases at a particular level.

Levels are designed to help the developers and testers to identify the missing areas of software. All the phases of SDLC go through the process of software testing levels. With the help of levels we can easily identify bugs in earlier stage and give the better quality software in the end.

Basically, there are four main levels of Software Testing

We will discuss all levels in detail in a separate Blogs which helps to understand the purpose of each level in software testing and how can we do it. 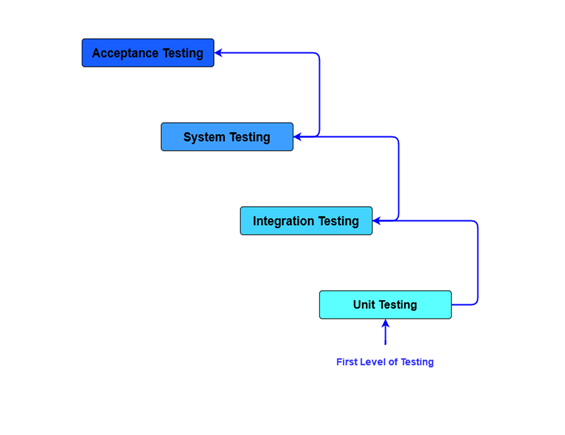 Unit Testing is technique of White Box testing, because in unit testing developers test the code to make sure the functionality performs as expected with this code run. Due to time crunch developers doesn’t give more time to it that’s why QA Engineers perform unit testing. But the developer is the best tester of Unit Testing to identify their faults in the code.

Unit Testing is important because sometimes developers try to save their time and doing minimal testing on individual units and after that inappropriate unit testing leads to high Bugs or Defects fixes in System and Integration testing. If proper unit testing is done in early stage of development, then it saves time and cost in the end which is good for the team.

Here are the key reasons to do unit testing in early development stage:

Unit testing techniques can be categorized into three categories:

Following Code coverage testing techniques used in unit testing to verify the functionality of each unit:

The conclusion or the summary of the above overall discussion is that Unit testing is the basic type of testing which needs to be done in earlier stage to identify bugs and fix it before given the build. Normally, developers done the unit testing from their ends but sometimes QA engineer also did it. The main purpose of the Unit Testing is to identify the bugs or defects in early stages which can create much bigger problem after the integration of units.


Join us next time, as we continue our journey of learning canvas apps.Click here to learn more about Imperium's Power Apps Services. We hope this information was useful, and we look forward to sharing more insights into the Power Platform world.