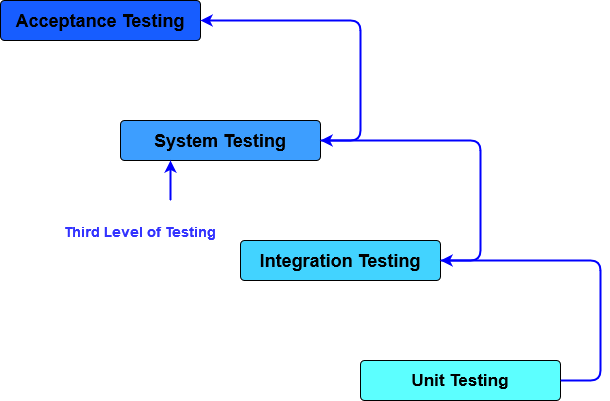 What to Test in System Testing?

There are many types of testing performed in this level of Testing to identify maximum no of bugs. Some of them are given below:

This type of testing the software is to ensure the requirements of an application or software, verifying that either the app or software works as per customer needs. Functional Testing basically concerned about what will be the result of this executing process.

Regression Testing is defined as the type of software testing to confirm that a recent program or a change in code has not adversely affected existing features.

The purpose of this testing is to check how the software response. It eliminates the reason behind the slow and limited performance of the software.

For Performance testing, a well-structured and clear specification must be defined. Otherwise, the result of the test is not obvious either it is pass or fail.

Load testing is performing to check that how much load software can bear in a specified and limited time. To verify that how more users or requests can endure in specified capacity or not.

Stress Testing is done by increasing the number of users (at the same time) on an application to an extent that the application breaks down. This is done to verify the point at which the application will break down.

The purpose of this testing is to check how much the system or software or application is efficient according to current user experience specification. How much efficiently used in the market or some specified environment.

In this testing we verify the GUI of the software system, either it is implemented according to all type of users or not. Its GUI interact the Users correctly or not.

Sanity Testing is performed when the build is released with a change in the code or functionality or if any bug has been fixed. It verifies that the changes done have not affected the code and no other issue has occurred because of that and the system works as previously.

Smoke Testing is a testing that is performed on the build to verify if the build is further testable or not. It verifies that the build is stable to test and all the critical functionalities are working fine. Smoke testing is done for the complete system i.e. end to end testing is done.

Basically in System Testing, Tester verifies the functionality of the software or application after interaction with the system. If software or application is working fine with System then its good, otherwise it can cause some bugs or crash the apps. In this Level of Testing we can cover maximum scenarios related to the system and also verify that how user will interact with this System and how they will use it. It covers all types of testing to make sure that all functionalities are working fine as per given requirements from the customer end. It helps the team to verify the Performance of the Software with the System.