How to Perform Regression Testing

What is Regression Testing?

Why Should we do Regression Testing?

The purpose of Regression Testing is to verify if code change introduces issues/defects into the existing functionality. There are so many kinds of possible changes that can impact the existing functionality in an application system. Even the simplest change to the code could impact previously tested functionality.
Regression testing involves the implementation of specific test cases and comparing them to previously recorded outcomes. Understandably, this procedure forms the basis of the reports used to illustrate software defects or deviation from use-cases.

How to Perform Regression Testing?

Once the bugs are identified, required changes are made to fix it, then the regression testing is done by selecting relevant test cases from the test suite that covers both modified and affected parts of the code.
Software maintenance is an activity which includes enhancements, error corrections, optimization and deletion of existing features. These modifications may cause the system to work incorrectly. Therefore, Regression Testing becomes necessary. Regression Testing can be carried out using the following techniques: 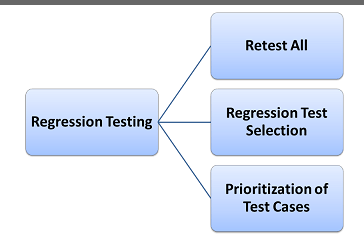 Effective Regression Tests can be done by selecting the following test cases:

Difference between Retesting and Regression Testing: